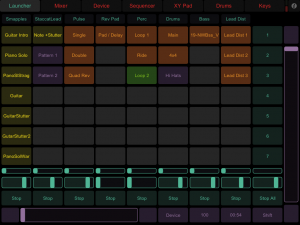 I recently found Live Control which is an open source template for TouchOSC that incorporates user midi remote scripts just like the APC40.  It’s a really phenomenal tool, because it basically allows you to turn your iPad into an APC40.  At least the python script was written to interact with Ableton Live in much the same way giving an insane amount of control with minimal effort.  In fact, it communicates both ways with your computer via wireless wifi connection, so you can even see what the names of the songs are right on your iPad without having to ever look at your computer.

Not only do you get the great launch grid view, but you also get a mixer, labeled device knobs, a sequencer, an assignable XY pad, drum pads, and keyboard.  In some ways it’s better than using the APC40, because you can see the names of the perimeters you’re controlling more easily.  It also has some functionality that isn’t included with the APC40 by default like the step sequencer. (which works great by the way…)

It was a little tricky for me to figure out how to start using Live Control properly.  It took some fiddling around to get everything installed and configured, although it was well worth it.  The best part is Live Control is free open source!  All you need is an iPad, iPhone, or iPod Touch with the TouchOSC app which is very affordable, and you suddenly have a powerhouse of controllerism right at your fingertips.