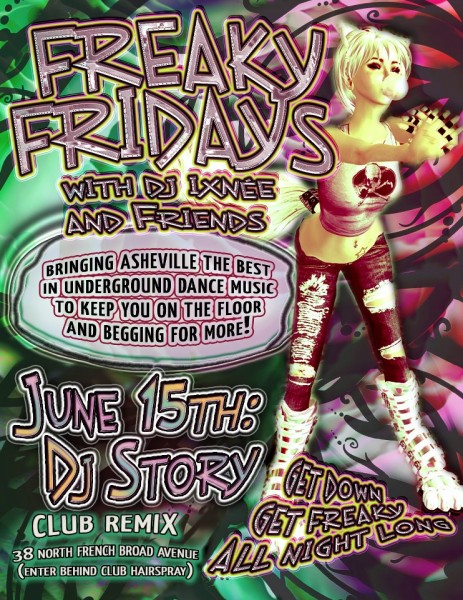 Bringing Asheville the best in underground dance music to get you down on the floor and begging for more! Freaky attire strongly encouraged! Bring out your feathers, your leather, your fun fur, glow toys, and LED’s! And be ready to get down, and get freaky, all night long.

DJ Story was Born in Jamaica (1985), and grew up surrounded by music in Santa Fe, NM. His father played in the old school roots reggae/ska band, “Justin Hinds & the Dominoes,” and he started studying traditional Zimbabwean music in 1997. He has been DJing since 1998 when he attended a mixing/scratching workshop. Soon after, the front man from the notable 80s rock band, “Winger,” recognized his musical talents and set him up with a home recording studio. Since then, Story has produced hundreds of songs, and has performed at festivals and events all over the West Coast and Hawaii such as Burning Man, Source, Telemagica, Mystic Garden Party, Synergenesis, and full moon gatherings on the lineup with the various internationally known artists including Ott, Bluetech, Beats Antique, David Starfire, LYNX & Janover, EOTO, Random Rab, Phutureprimitive, DJ Dragonfly, Tipper, Rara Avis, Cheb i Sabbah, Desert Dwellers and more. www.soundcloud.com/djstory

And of course resident Dj Ixnée will be at it again- spinning her unique style of dirty, booty-dropping, beat-driven Electro Freak-Tech. Driven by the beat, the breaks, and the bass, she isn’t content to stick with the status quo. Ixnée’s goal in life is to make people happy, and it shows the creative madness of her dj sets. Ixnée has been rocking dancefloors across the country since 2007- from the legendary Freakeasy and Resonate parties in Chicago, to some of San Francisco’s top underground venues, and countless outdoor festies including the craziest party of them all: Burning Man. She lives on the edge of the norm to keep her audience on their toes, literally. She never forgets that we are all in this adventure together, and that we come together through music and dance. Whether she is melting minds with a full-on breaks set, or getting your ass to the floor as she drops the bass on your face, Ixnée will never let you down. www.soundcloud.com/ixnee

Founder, Producer & Performer at Intuitive Beats
Antandra is the moniker of music producer and performer, Jacob Louis. His sound can best be described as bass infused rhythms with suspenseful atmospherics and etheric melodies. He has releases featured on Jumpsuit Records, LostinSound, Mycelium Music and Pure Perception Records, and has performed his original music at Kinnection Campout, CoSM, Burning Man, Unitus, T.O.U.C.H. Samadhi Equinox and many more! He has shared the stage with numerous world class artists including the likes of Desert Dwellers, Sixis, Ott, Kalya Scintilla, AtYyA and Globular.
Posted in Past Events