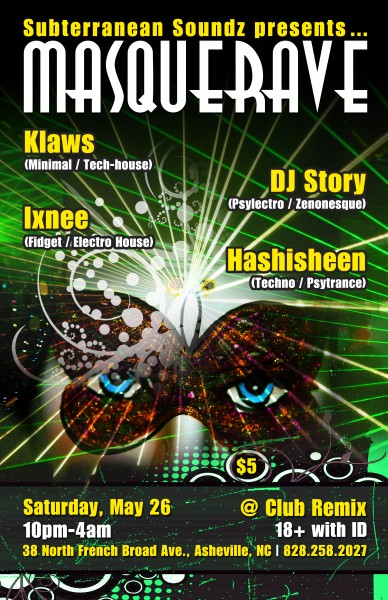 You are encouraged though not required to come in your sexiest costumes for a night of drinking and dancing. Coming to you with the freshest fidget, electro, psy, techno, and trance from some of the area’s dankest djs.

Klaws first got exposed to the sounds of electronic music in his native country Romania. Since then, his passion for driving, cutting-edge music only became stronger. He lived in France for several years, where he came in contact with a thriving music scene.
He later moved to South Carolina and now has played parties throughout the SouthEast US, France, Romania, and beyond as well as co-organized numerous Pangea Productions events and one of area’s fastest growing and most diverse electronic music festivals, “Welcome to Pangea” now in its’ fourth year.
You can tune in and listen to Klaws every second Friday of the month on the highly rated electronic net-radio www.di.fm on the minimal channel from 12-2pm EST. The show, “Technological”, is hosted by Klaws and DRaigosa and brings you the best in today’s techno and minimal.
Together with the Pangea crew Klaws is constantly pushing the boundaries of electronic music to create driving, hypnotic, atmospheric dance music. Styles range from minimal/tech to dub/tech to electro. Influences come anywhere from funk to jazz, Detroit melodic techno to harder European minimal sounds, always keeping it deep, spacey, and with a driving groove. ( www.soundcloud.com/klaws )

Ixnée has been rocking dancefloors across the country since 2007- from the legendary Freakeasy and Resonate parties in Chicago, to some of San Francisco’s top underground venues, and countless outdoor festies including the craziest party of them all: Burning Man.

She lives on the edge of the norm to keep her audience on their toes, literally. Driven by the beat, the breaks, and the bass, she isn’t content to stick with the status quo. Ixnée’s goal in life is to make people happy, and it shows the creative madness of her dj sets.

She never forgets that we are all in this adventure together, and that we come together through music and dance. Whether she is melting minds with a full-on breaks set, enticing the curious with intriguing chill sounds, or getting your ass to the floor as she drops the bass, Ixnée will never let you down. ( www.soundcloud.com/ixnee )

DJ Story was Born in Jamaica (1985), and grew up surrounded by music in Santa Fe, NM. His father played in the old school roots reggae/ska band, “Justin Hinds & the Dominoes,” and he started studying traditional Zimbabwean music in 1997. He has been DJing since 1998 when he attended a mixing/scratching workshop. Soon after, the front man from the notable 80s rock band, “Winger,” recognized his musical talents and set him up with a home recording studio. Since then, Story has produced hundreds of songs, and has performed at festivals and events all over the West Coast and Hawaii such as Burning Man, Source, Telemagica, Mystic Garden Party, Synergenesis, and full moon gatherings on the lineup with the various internationally known artists including Ott, Bluetech, Beats Antique, David Starfire, LYNX & Janover, EOTO, Random Rab, Phutureprimitive, DJ Dragonfly, Tipper, Rara Avis, Cheb i Sabbah, Desert Dwellers and more.
In 2009, DJ Story moved to Asheville from Maui, and started playing electro bass, didgeridoo and soundscapes in the local world music band, “Nataraj.” All his music on soundcloud is available as free downloads, although donations are always appreciated. You can find his album, “Seed of Sound,” in the iTunes music store. He also has a free iTunes podcast, “Intuitive Beats,” featuring some DJ mixed sets. Visit DJ Story’s website, www.IntuitiveBeats.com, for more info, tutorials, and downloads. ( www.soundcloud.com/djstory )

HASHISHEEN (Asheville, NC) From his homebase in the mountains of Western North Carolina, Hashisheen appears out of darkness and smoke to bring dancefloors alive with pychedelic beats to stimulate the mind as well as move your feet. ( www.facebook.com/thehashisheen )