Sat in with Nataraj Last Night 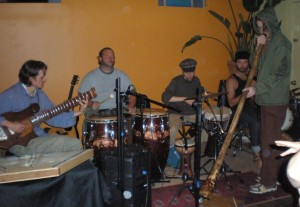 Nataraj is the name of a live local world music band.  Last week, one of the members contacted me through this website.  He asked if I would be interested in adding an live electronic music element to their band.  Nataraj is an offshoot of another local band called Arundas who I had seen and loved, so of course I am interested in meeting up with the band to see what we can work out.  Alex invited me to come out to one of their gigs at a place in downtown Asheville called Bobo’s Gallery and play didgeridoo with them.  I went to sit in with them last night, and I had a fantastic time!  They are a band of 4 who play African drums, electric sitar, hammer dulcimer, keyboards etc.  It was very fun to improvise with them in front of the crowd.  I am going to meet with the band to see about further collaboration including my skills with Ableton live and DJing.

Something really synchronistic just happened as I was writing this entry.  About 45 minutes ago, I put on a mantra cd by Arjun & Guardians.  It’s my girlfriend’s CD that I just found laying around.  Anyway, I had no idea what was on it, and guess what mantra came on while I was writing this…  That’s right!  Nataraj.  So, I looked up what Nataraj means, and it turns out that it’s basically the image of Shiva dancing.  The God of dance.  I just thought it was pretty interesting that I was writing about Nataraj, and then I was like, wow, are they chanting Nataraj in the music?  Must be a good sign.   😉

Founder, Producer & Performer at Intuitive Beats
Antandra is the moniker of music producer and performer, Jacob Louis. His sound can best be described as bass infused rhythms with suspenseful atmospherics and etheric melodies. He has releases featured on Jumpsuit Records, LostinSound, Mycelium Music and Pure Perception Records, and has performed his original music at Kinnection Campout, CoSM, Burning Man, Unitus, T.O.U.C.H. Samadhi Equinox and many more! He has shared the stage with numerous world class artists including the likes of Desert Dwellers, Sixis, Ott, Kalya Scintilla, AtYyA and Globular.
Posted in Past Events Tagged with: Ableton Live and DJing, Arjun & Guardians, Asheville Music Scene, didgeridoo, DJ Story News, God of Dance, Nataraj, Synchronistic