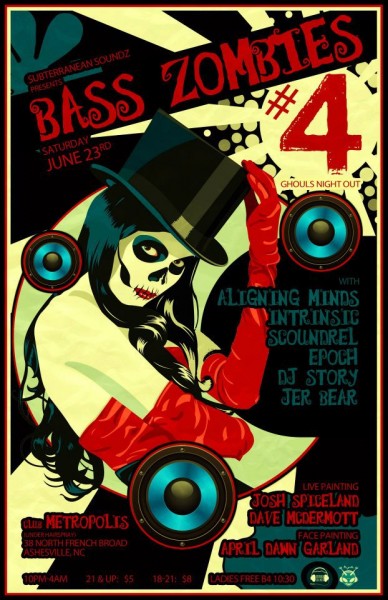 Aligning Minds is the unique and captivating collaboration of two
producers using sound to achieve a mutual vision. Ethereal and dubby, uplifting and haunting, their music winds its way through the imaginative souls of its listeners, offering a deep exploration of subsonic mood and emotional atmosphere. Focused on unifying electronic music through diverse influence, their sound fuses elements of …many genres like downtempo, dubstep, breakbeat and idm – but without the need for formulaic restrictions.

The Aligning Minds sound is melodic and bass heavy. It’s emotionally charged future music that rides on hypnotic breakbeats, infectious basslines, dubby soundscapes, and idm experimentation for one to dance or lounge to.

His music blurs the lines between many genres, juxtaposing a range of tempo, styles, textures and structures all fused by an inherent melodic element.
Live he often uses a variety of interfaces such as wii remotes, joysticks, p5 gloves, and midi controllers to trigger and warp the sounds
– dancing to and thereby creating the modulations within – a rich and intricate soundscape.

He is also known for setting up interactive visual projections controlled by sound, fire, and a variety of peripheral devices.
Integrating a keen sense of musicality, he syncs visual elements with the music- creating a cohesive, multi-sensory, interactive experience.

He is also a fire performer who specializes in poi, double staves and stilt walking. He worked with Unifire Theatre from 2007 through 2010.
Over the past 10 years he has performed/ spun/ projected alongside too many names to list @ festivals throughout the southeast while working with Pure Perception Records, Skew Records, Heterodox Records, and Wondrous Temple of Boom

DJ Story was Born in Jamaica (1985), and grew up surrounded by music in Santa Fe, NM. His father played in the old school roots reggae/ska band, “Justin Hinds & the Dominoes,” and he started studying traditional Zimbabwean music in 1997. He has been DJing since 1998 when he attended a mixing/scratching workshop. Soon after, the front man from the notable 80s rock band, “Winger,” recognized his …musical talents and set him up with a home recording studio. Since then, Story has produced hundreds of songs, and has performed at festivals and events all over the West Coast and Hawaii such as Burning Man, Source, Telemagica, Mystic Garden Party, Synergenesis, and full moon gatherings on the lineup with the various internationally known artists including Ott, Bluetech, Beats Antique, David Starfire, LYNX & Janover, EOTO, Random Rab, Phutureprimitive, DJ Dragonfly, Tipper, Rara Avis, Cheb i Sabbah, Desert Dwellers and more.

In 2009, DJ Story moved to Asheville from Maui, and started playing electro bass, didgeridoo and soundscapes in the local world music band, “Nataraj.” All his music on soundcloud is available as free downloads, although donations are always appreciated. You can find his album, “Seed of Sound,” in the iTunes music store. He also has a free iTunes podcast, “Intuitive Beats,” featuring some DJ mixed sets. Visit DJ Story’s website, www.IntuitiveBeats.com, for more info, tutorials, and downloads.

Begun at the beginning of this year, Scoundrel is an original and mashup production project of Jhan Aeon and Cleofus Williams. They currently host the weekly Wicked Wednesdays at Remix and in April they released their debut ep, Bad Advice From Shady People, featuring originals including a collabortion with Molly from Paper Tiger.

Edward J. Ramp (AKA epoch) has been deep into the electronic music scene since 2004. Starting out in Lansing, MI, EPOCH rocked the local clubs with a variety of both main stream and electronic events as well as long standing residencies at Club Rush, ENSO, Lou & Harry’s and Ricks. After moving to Detroit and working with the Detroit Dubstep crew at The Works Night Club, he really came into his most recent sounds. EPOCH has steadily progressed his style into the harder more dynamic basslines of dubstep/drumstep mixed with the sexy stylings of Hip Hop/Glitch and is now best known for his extremely energetic and filthy live sets.
Edward recently moved to Asheville, NC where he quickly plugged into the local dj scene. He has performed with many well established artists such as Trill Bass, Mantis, DLX, Knyphy, Jackal and Hyde, and Matt Clarke.
Coming hard with the grimiest sounds, EPOCH is sure to light up dance floors of any size.

With roots running deep in the darker side of metal, hardcore, and punk rock, you can always be sure that Jer Bear will bring an energetic set to the dance floor. His goal is to bring some of the hottest and darkest underground sounds of Dubstep, Drum and Bass, Glitch-Hop, and Electro House, all while making sure to keep it dance floor friendly. Starting his DJ career in early 2011 Jer Bear has already shared the stage with heavy hitters such as Freddy Todd, Mantis, D-Queue, Cry Wolf, Bitch Please, Fast Nasty, Spooky Jones, TC Izlam, Spektr, and Hipnotikk. Always keeping the music itself as the center of attention, rather than who is playing it, Jer Bear’s love for the music he selects has been known to get even the biggest of skeptics to lose inhibition and rage it on the dance floor.. be prepared to dance when this guy’s on the decks.

Ear Candy – KZFR Community Radio in Chico, CA
How I Repaired the Slider On My Korg
Squishy & Squelchy Psydub Sounds in Serum

Founder, Producer & Performer at Intuitive Beats
Antandra is the moniker of music producer and performer, Jacob Louis. His sound can best be described as bass infused rhythms with suspenseful atmospherics and etheric melodies. He has releases featured on Jumpsuit Records, LostinSound, Mycelium Music and Pure Perception Records, and has performed his original music at Kinnection Campout, CoSM, Burning Man, Unitus, T.O.U.C.H. Samadhi Equinox and many more! He has shared the stage with numerous world class artists including the likes of Desert Dwellers, Sixis, Ott, Kalya Scintilla, AtYyA and Globular.
Posted in Past Events